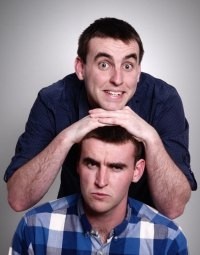 Benjamin and James Stevenson are identical twin brothers who combine to form The Stevenson Experience. They are experienced and versatile festival comedy performers and have sold out shows at the Melbourne International Comedy Festival every year since 2011. They have been featured on ABC TV, Channel 10, Triple J Radio as well as performing alongside comedy giants Amy Schumer, Bo Burnham and Wil Anderson.

The Stevenson Experience are experienced and in-demand corporate MC’s. Delivering both professionalism and a lively mix of interaction between themselves and the audience, each event is unique and engaging and is bolstered by the Stevenson’s lively and upbeat songs.

The Stevenson Experience have been the MC for many charities, corporate functions, and large scale events; including Floriade Night-fest, The Australian Multiple Birth Association, The Canberra Comedy Festival Gala, The Cancer Council, The Australian Defence Force and many others.