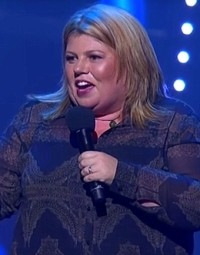 Ex-pat South African and now NZ’s own, Urzila Carlson is one of New Zealand's most loved comedians.

Since taking the comedy stage in 2008 she has racked up an impressive array of awards and is now a regular on our TV screens.

Urzila's natural cheeky, straight up style will have you eating out of her hand* the moment she takes the stage and you’ll want to be her friend.

Internationally she is becoming a sort after act with 5 sold out seasons at the Melbourne International Comedy Festival, television appearances on Spicks and Specks, Dirty Laundry, Have You Been Paying Attention, The Great Debate, Comedy Up Late and the Melbourne Comedy Galas. Urzila has also done sold out festival shows in Perth, Sydney and Adelaide Comedy Festivals, she has also performed for Just For Laughs at The Sydney Opera House.