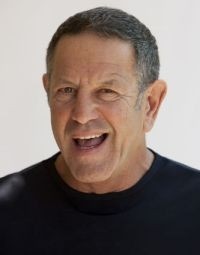 George is without doubt the wildest, most outspoken and most original GIANT of the comic stage. He is also an accomplished Master of Cermonies, which he can combine with a comedy spot for corporate events.

He has headlined and performed alongside the likes of Joe Cocker, Talking Heads, Neil Sadaka, Joan Rivers, Ricky May, Michael Winslow, INXS, Tiny Tim, Midnight Oil and U2...you name it, he's done it! His appeal is universal.

George is THE ONLY COMEDIAN to Top the Australian and NZ music charts, and USA comedy charts, with his hilarious hit monologue “I’M TUFF”. Knocking off Stevie Wonder’s mega hit song “I just called to say I love you” from the No 1 spot, George stayed at No 1 for an unbelievable 7 weeks. He sings and plays the guitar.

George's TV performances include The Footy Show, Mornings with Kerri-Anne, 20-1, Hey, Hey it’s Saturday, Wide World of Sports, Comedy Store, Four Corners, Stand up Australia and heaps of acting roles in movies, TV Dramas and TV commercials, he appeared in The first McDonald's ad and was the writer and producer of 6 award winning ads for Faberge. Currently George is producing three television shows.

The material was fresh and he was funny, very, very funny and had the crowd at Sydney Casino in hysterics all night long.

George Smilovici was a great hit at our dental prosthetics graduation dinner. His performance was tremendously enjoyable and his cheeky humour had our guests falling off their seats with laughter. To everyone's surprise George closed his act by playing a couple of Flamenco instrumentals on his guitar which were absolutely delightful. Many of the guests expressed how much they enjoyed George's act and how refreshing it was to have a comedian as the guest speaker.I have no hesitation in recommending George to other organisations. George's performance certainly made our evening a success!

George Smilovici hosted the entire run of the FAIRFAX SUPPER CLUB for all our national and international clients during the OLYMPIC GAMES. Not only was he unique and immensely funny but his charm and generous spirit gave him an amazing control of his varied audiences. This was really something to experience.