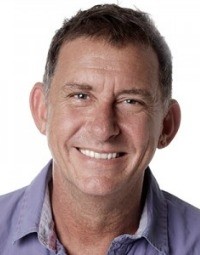 Peter Rowsthorn is a high energy, fast paced stand-up comedian one minute and a measured character actor the next. A masterful MC of corporate and private functions, he has been performing his blistering stand up for almost two decades.

On television, Peter appeared regularly on Thank God You're Here series 1, 2, 3 and 4, popped up on Talkin’ ‘Bout Your Generation and hosted the delightful Can We Help on the ABC. He has had roles in Open Slather, Underbelly: Squizzy, It’s A Date, Timothy, and featured on the SBS genealogy series Who Do You Think You Are? Peter is probably best known as long-suffering husband and pants-man Brett Craig on the hugely successful television series Kath & Kim, reprising this role on the silver screen in 2012 in Kath & Kimderella.

Peter has performed on stage in Black Swan State Theatre Company’s productions of Glengarry Glen Ross, The Importance Of Being Ernest and Laughter On The 23rd Floor. Other theatre credits include The Tempest, Certified Male and The New Rocky Horror Show.

Peter’s film credits include Paper Planes and Looking For Grace and the short film Welcome To Dookie. Peter appeared in the feature film Three Summers, the first Australian movie from British writer and comic Ben Elton.

Peter also appeared in the 2018 season of 'I'm a Celebrity Get Me Out Of Here' show.