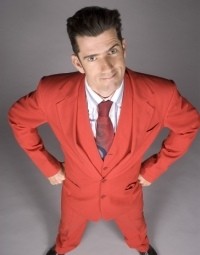 Juggling Percussion - This original form of percussion is ridiculously technical and musically swinging. A crowd favourite.

Ping Pong - An unexpected and hilarious combination of facial gymnastics and physical absurdity, this act culminates with Joel juggling balls from his mouth.

Accidental Stripper - A classic comedy juggling routine where everything goes wrong. This act has taken Joel around the globe for the last 15 years.

Jamidi - 6 electronic pads on Joel's hands and forearms are struck by glowing balls that trigger sound and laser effects. It's interactive and high impact. Check out the video.

This man is funny! Joel Salom is charismatic and a born performer - quick-witted and a fabulous improviser, he interacts with audience members and adapts to sudden changes and occurrences as if they are the most natural thing in the world. And all the while making his audience laugh hysterically.

I have been incredibly impressed by everything I have seen Joel do. I have worked closely with him on a number of projects since I first met him at the National Australian Circus Festival in 1996. His skills are fantastic, his material consistently funny and well constructed and his professionalism is absolute. He is a delight to work with. While always well prepared he is also able to be flexible and adapt to changes at the last minute. As a compere he has that magic ability to warm up the audience and make them expectant and excited.