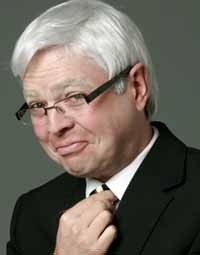 “If only future generations could be here now to see how well I’m spending their money.” Our esteemed ex Prime Minister’s minders in Canberra want the Ruddster to reach out to as many of his fellow Australians as possible, so Kev is now available for your function! Yes, whether it’s for a “meet and greet” or a rousing keynote address, Kev can be there especially if there's a decent photo opportunity!

Alex Manfrin, formerly of John How-Odd infamy has undergone hours and hours of arduous plastic surgery to perfect his Kev Rudd look. Recently he received the last of his hair transplants to give him a main of silver hair in the style of the PM. Alex is now in massive debt to his cosmetic surgeon and needs to pay his medical bills ASAP! Book him now and take the strain off Medicare!

Mr Abbott is only too eager to embrace his fellow Australians (in a masculine matey way, nothing weird) and show them that people smugglers are no match for budgie smugglers! Yes, and Phony Abbott is also keen to let Aussie ladies know he regards the fairer sex to be as just as capable and important as normal people! So c’mon Australia, sign him up now! Phony’s waiting to get behind your lectern and show it who’s boss!

Alex’s work has appeared on Radio National, 720am, Homegrown Humour, SBS and at the Melbourne International Comedy Festival. After taking a break from working as lighting designer in the music industry Alex returned to his first love, cartooning. Self-publishing two compilations of his work gave him experience at producing gags under pressure. This led him to working as a sketch comedy writer for 96FM’s breakfast show from 1989-93.

That same year Alex staged his first production at the Blue Room, Dreaming of a Green Christmas (featuring Ian from the Hills). The following year he returned to the Blue Room studio with a parody of then-Premier Richard Court titled Dick Jokes, part of the 2000 Artrage Festival.

Alex has been very active in helping to promote WA’s comedy talent. As well as being a committee member for the Laugh Resort he coordinated Fremantle’s only regular showcase for comics, The First Friday of the Month Comedy Show at the Fremantle Hotel from 1995 -2005 and launched Freo’s latest stand-up comedy night at Mojos Bar.

It was a very successful and enjoyable night. Very funny Kevin Rudd.

... stole the show with his nothing-short-of-brilliant performance...