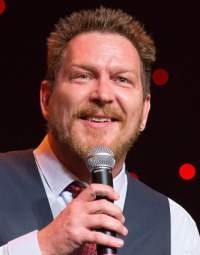 Mike van Acker has been a fixture of the Australian Comedy Circuit since his Stand Up debut in 1992. In that time he has toured internationally, appeared on TV and Radio, won awards and commenced a business operation within the comedy industry. This unique blend of experience and ability has positioned Mike perfectly for what has become his specialty; Master Of Ceremonies/Facilitator at corporate events.

With a list of past clients as diverse as Australian Institute of Hotel Engineers, The Sunflower Growers Assoc.’ and the Australian Taxation Office, Mike has vast experience and expertise in facilitating events, conferences and awards nights.  His business background allows him the ability to maintain the appropriate ‘tone’ for an event, whilst his comedy experience allows him to inject some humour or ‘lightness’ when required.  For these reasons Mike enjoys repeat business from the vast majority of his clients.

In 2018 Mike joined the successful Brisbane Breakfast Radio team at 97.3.

Performances in Comedy Clubs throughout Australia, New Zealand, The UK and USA

Performances at hundreds of corporate events as MC/Facilitator

Performances at hundreds of corporate events as Comedian/Keynote Speaker

Performances at dozens of corporate events as an ‘Industry Expert’/’Corporate Impersonator’ and comedy debator.

Mike was absolutely fantastic. He was professional, friendly, energetic, dynamic, flexible in delivery, and we feel he really did go above and beyond the 'call of duty'. He had exceptional time management skills and was able to assist us in dealing with a couple of stressful situations that occurred during our Conference. He met with us beforehand to discuss our needs and he exceeded all of our expectations. Funny, friendly, fabulous and highly recommended to all.

Mike was absolutely brilliant! For the past 2 AIPP Queensland National Conferences we have had Mike as our Compere/Master of Ceremonies. His professionalism and dynamic personality fitted perfectly into our event. He engaged the audience with ease and made everyone laugh which relaxed the speakers to follow. I would have no hesitation in recommending Mike to any company that are looking for the charismatic professional MC. We certainly will be using Mike again to put a professional face on our events.