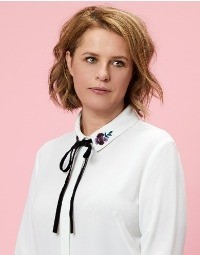 Anne “Eddo” Edmonds is one of Australia’s most exciting stand-up, character and banjo playing comedians. Smashing onto the comedy scene in 2010 as a national finalist in Raw Comedy, Anne has performed at festivals across Australia and around the world.

Voted Spleen “Comic of the Year” by her fellow comedians in 2014, Eddo sold out her 2015 offering You Know What I'm Like, winning a prestigious peer award at MICF and taking the show to London’s Soho Theatre in January 2016. She returned to Australia and toured her new hour That’s Eddotainment, which was nominated for the Barry Award at the 2016 Melbourne International Comedy Festival. That’s Eddotainment was also chosen to be recorded for the inaugural series of the ABC’s Next Gen comedy specials.

Anne was also a member of the “True Australian Patriots” with Greg Larsen and Damien Power – as seen on their incendiary Facebook page, on The Weekly with Charlie Pickering and smashing up the Brisbane, Sydney and Melbourne comedy festivals, where they were awarded the Director’s Choice Award.

Eddo’s most recent solo show No Offence, None Taken saw her receive a second consecutive MICF Barry Award nomination. After starring on the Oxfam Gala and touring extensively around Australia, she took the show to the Edinburgh Festival Fringe and London’s Soho Theatre. She also was selected to perform at the Just For Laughs All-Star Gala in Sydney, alongside some of the biggest names in the comedy world.

Also in 2017, The Edge of the Bush, the Scandi-noir-inflected comedy series Anne created, wrote and starred in for ABC TV, debuted to critical acclaim. The series is now available to view in its dark, sparkling entirety on ABC iView.

Anne continues to be a familiar face on Australian TV screens as she makes regular appearances on Network Ten’s Have You Been Paying Attention? and Hughesy, We Have A Problem. She also starred in ABC comedy series Fancy Boy and achieved cultlike status as fashion Krackspert Helen Bidou on Get Krack!n. Helen’s live show, Enter The Spinnaker Lounge – will thrill late night MICF audiences in 2018.