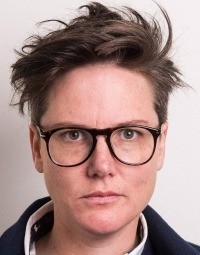 Hannah Gadsby is an award-winning Australian comedian who thinks quickly and moves slowly.  She is sardonic, laconic and, after numerous bone crunching accidents, bionic.  Her droll delivery, delightful wordplay and heart-breakingly funny, self-deprecating observations have delighted audiences all over the world.

Hannah is a regular across our television screens, making numerous appearances on the Melbourne International Comedy Festival Gala’s, as a regular on ABC TV’s Adam Hills Tonight from 2011 to 2013 and for the past three series, starring in Josh Thomas’ critically acclaimed Please Like Me in Australia and the United States as the character of, Hannah.

Desperate to make use of her art history degree for the purposes of debt recovery, Hannah has written and presented three art documentaries for ABC TV and takes every opportunity to present her incredibly popular comedic art lectures at festivals around the world alongside her stand-up comedy shows. The most recent of these documentaries Hannah Gadsby’s Nakedy Nudes premiered in February 2018.

Her most recent stand-up show, the self-described swan song Nanette, saw Hannah win Best Comedy at the Adelaide Fringe Festival, the Barry Award for best show at the Melbourne International Comedy Festival, the Helpmann Award for best comedy performance and the Last Minute Edinburgh Comedy Award (the comedy equivalent of an Oscar).

Since her success in Edinburgh, Nanette has had a return run in Melbourne performing shows the Arts Centre, a season at the Sydney Opera House, two runs at London’s Soho Theatre and an upcoming run at the New York Soho Playhouse.

In January 2018, Hannah recorded Nanette at the Concert Hall of the Sydney Opera House for the first Australian Netflix Original Comedy Special.  She has gone on to receive incredible success in USA with this show.