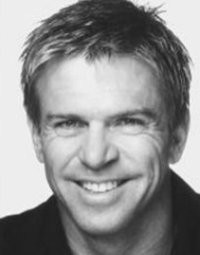 Marty Coffey is Australia's best American juggler. Known for causing a furore on the Midday Show when he pretended to juggle two live kittens with a running chainsaw, upsetting many short sighted home viewers... and all in the name of comedy!

Marty's act is a clever combination of spectacular juggling, fire eating and death defying feats, all wrapped up with nonstop humour. Among his routines are the uproarious apple, bowling ball and egg juggle where he eats the apple during the stunt. There is the 'dangerous objects juggle' atop a two metre unicycle where Marty enlists the help of the audience in getting started. And of course he likes to finish on his now famous chainsaw juggle (sans kittens for the stage act!). With or without cats his deftness for combining hilarious patter, visual surprise gags and tension building stunts always keeps the audience on the edge of their seats.

Marty's comedy act and years of experience as an entertainer lends itself easily to the role of awards dinner compere/MC. From the unique way he commands undivided attention at the start of the proceedings to the spectacular way he can close the show, the audience is always wondering "What is he going to do next?" The answer is always something even bigger and funnier.

Marty sometimes works as a 'hoax' speaker or Master of Ceremonies, assuming the character of Chuck Dillon, HR expert from the great state of Texas. The gradual transformation from corporate big shot to illustrating a few points with three juggling balls, to getting helped up on a tall unicycle in a suit and tie takes the classic hoax to formula a step further.

We wanted entertainment and he gave it!

Provided a lot of fun and thrills. The audience involvement was great.

Thank you for procuring Marty Coffey. Our feedback from our delegates has been enormously positive. He was larger than life in his hoax character and things only got bigger from there. It really made what everyone thought would be a boring dry afternoon into a virtual amusement park ride.