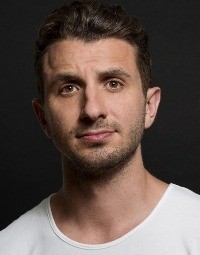 Tommy Little is the most exciting comedian of his generation. His comedy bubbles with an irresistible energy – bursting to tell you the next story. His live shows are events – fun, noisy gigs playing to bigger audiences every year.

His queues snake around the corner with fans who come back year after year to hear Tommy’s tales of high stakes dickheadery – most recently it was a story of running a marathon in Antarctica. Tommy’s life generates plenty of material and there is no lock of fans waiting to lap it up.

For the last few years, Tommy has been the host of the Just for Laughs Stand Up Series from the Sydney Opera House, filmed for the Comedy Channel in Australia. He hosted the Comedy Channel’s Whose Line is It Anyway? Australia and is a regular co-host and correspondent for primetime nightly news and comedy program The Project on Network Ten.Tommy co-hosts a national radio show every weekday with Carrie Bickmore on the Australian Hit Network. Tommy recorded his first ever stand up special for Amazon Prime which will be release in 2020.