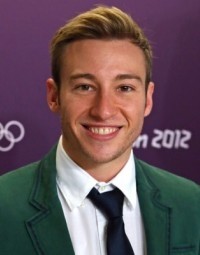 Matthew Mitcham is not only regarded as one of Australia’s greatest athletes and an Olympic Gold Medallist but also as a superb TV personality, inspirational corporate speaker, social media extraordinaire and author.

Matthew carved his name into the record books at the 2008 Beijing Olympic Games when he performed the single greatest dive in Olympic history to become the first Australian male to win an Olympic Gold medal in diving since Dick Eve at the 1924 Summer Olympic Games. In what was a remarkable 10m platform final, Matthew entered the final round of dives in second place, 34 points behind Chinese diver Zhou Luxin. An extremely difficult assignment, Matthew needed to score 107.30 to claim gold. Matthew performed his final dive with precision, scoring four perfect ten’s from the judges to achieve a score of 112.10, the highest single-dive score in Olympic history.

After winning Gold in Beijing, Matthew continued his dominance in the sport, winning Gold in the 10m Platform at both the FINA World Cup and the Canada Cup in 2010, finishing the year with the World No. 1 ranking in the 10m Platform. At the 2010 Commonwealth Games in Delhi Matthew secured silver medals in four events, the busiest program of any diver. Matthew then won Gold at the Canada Cup in 2011 (his only international event for the year.) In 2012 Matthew won Gold in the 10m platform at The Australian Open Championships.

Struggling with injury, Matthew courageously went on to compete at the 2012 London Olympic Games but failed to make the finals. Whilst he may not have achieved the high standards he set himself, he certainly proved he was a crowd favourite and one of Australia’s most likeable athletes.

Matthew’s interaction on social media with his fans during the Olympic Games ensured his fan base grew exponentially, earning him over 40,000 Twitter followers and over 80,000 Facebook fans. In 2012 Matthew was recognised for his outstanding work in social media, including; Most Influential Australian Athlete on Twitter during the Olympic Games, inclusion in Tom Waterhouse’s Top 10 Under 30 Social Media Influencers and winning the GQ Men of the Year Award for Social Force of the Year.

Matthew is a natural media talent and his charming, endearing and infectious personality transcends naturally to the television screen. Matthew has had extensive experience with interviews, commentary, documentary and TV filming, live broadcast hosting and TV commercials across both Free-To-Air and Pay TV. Matthew’s roles have included, FOXTEL Ambassador for both the 2010 Delhi Commonwealth Games and the 2012 London Olympics Games, a contestant on Season 2 of Australia’s Greatest Athlete and co-hosted FOXTEL’s coverage of the Mardi Gras.

Furthermore Matthew is considered to be one of Australia’s most inspirational corporate speakers, having worked with some of the country’s biggest companies including Macquarie Bank, Telstra, AMEX Australia, FOXTEL and many more. Matthew’s honesty mixed with humour is a brilliant combination and creates a wonderful experience for all of his audiences. Matthew has the talent to adapt his story and life experiences to the needs of the client.

In December 2012, Matthew released his highly anticipated autobiography “Twists and Turns”. His book received immediate success both domestically and internationally and received tremendous reviews including from the Sydney Morning Herald “A searingly frank memoir”. Matthew’s book tour throughout 2012/2013 was a great success and it further outlined Matthew as a wonderful talent in and out of the pool.